The ebook that has saved thousands of buyers and sellers time, stress and money
Home Property Buyers Guide The Media and Property Prices

Chapter 2: The Media and Property Prices


What the Media Use to Predict Property Prices

There are many sources of data to tell journalists what is happening to the housing market. Here are just a few:

All these sources of data tend to vary for different reasons so it is unsurprising that the media all too often produce conflicting reports. Good journalism is sadly lacking in the United Kingdom and reporting single, disputable sources of data is all too common.

The most frequently misleading reports are based on land registry, a popular source because their figures are definitive. Definitive, but out of date. Even so this is how the media reports versus the reality of the annual property cycle in which prices rise and fall twice a year (the Annual Property Cycle is covered in the chapter Understanding the Property Market).

This also confuses vendors, especially in the summer, when unrealistic expectations about how much their property is worth are common place. The market is dropping but they blame the agent and point to media reports telling them the market is rising. It's a bitter pill to swallow and rather than accept it many vendors change agents instead of taking advice.

This out-of-sync reporting is summarised on the table below:


Outside of misreporting the annual cycle the media also likes to manipulate any statistics it can to make a story, and property is always a good story. Sometimes it may just be poor reporting and research that leads to headlines of "Property Prices leap 20%" but when reading media articles about real estate values there are several ways to know if the story is worth the paper it is written on.

Firstly investigate the figures yourself. House prices do not rise consistently month after month as we will see in Chapter 4: Understanding the Property Market. Global events also cause fluctuations that either change or exacerbate the cycle. An example of this occurred in 2003 where the war on Iraq caused prices to drop by around 10-20% in central London. The war over, prices corrected themselves and then in the spring of 2004 rose another 10%. This lead the media to report that "House prices are rising by 18.5 per cent a year - Are we heading for a crash?" (The Independent, 3rd April 2004). Enough to make anyone think the market was over cooking itself. What the media didn't consider was that half of the rise was down to a recovery of the falling market that had occurred earlier due to people's fear over the war.

The graph below shows how easy it is to misreport, even in a market as large as London, using data from 2001 to 2015. 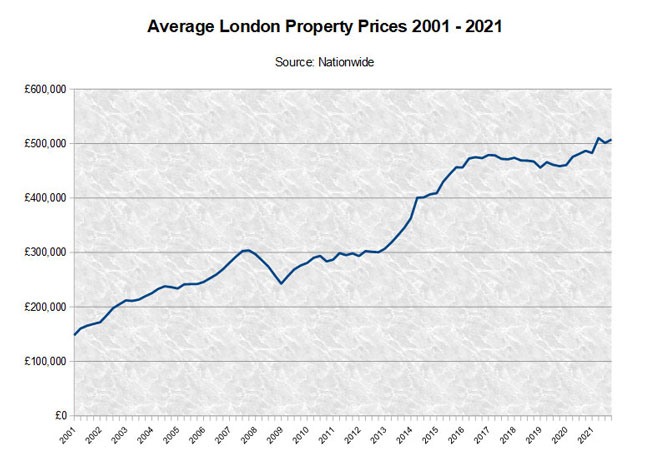 Taking the raw data from the graph it is possible to report the above in the following ways:

At an even more local level the media also loves to talk about "hot spots" on a month by month basis as if this were some reliable guide as to the best areas in which to invest. Price movements at this level are however, even more erratic as the following example shows.

At a local level (postcode SW4) there are not enough transactions to make sensible use of the data, but this does not stop journalists trying and often creating extremely misleading pictures, both positive and negative

Taking the raw data it is possible to report the above in the following ways:

In other words, no matter the headline you are after, you can find it in the data if you want to. The trouble is most news articles fail to mention their source but when they do, check it for yourself, it may just be a journalist manipulating figures in order to get himself a story.

Secondly, and on a similar note, watch out for any of the following in the text of media stories:

" many senior officials believe ";
" leading economists are saying ";
" it is widely believed ";
and so on!

If you have ever had to write an academic essay you will know that all sources must be quoted. So it is a mystery why leading journalists need only say, "leading city economists believe" and not quote who those economists are or where they have published their research.

Thirdly where the media do actually quote a source, do the obvious and find out how reliable that source has been in the past. As an example, in the Autumn of 2004 the Nationwide Building Society reported that property prices had fallen for "the first time in three years". This was certainly true according to their own records of what they were lending on. That was the key - what they were lending on.