The ebook that has saved thousands of buyers and sellers time, stress and money
Home Property Buyers Guide Understanding the Property Market


It is amazing how many people delay buying because they believe the market is falling, or rising too fast, or the market is steady and so may fall, and so on. In their defense they are encouraged to do so by the media which loves to paint all price rises as worrying and all price drops as the possible start of something bigger.

Friends, family and work colleagues are also very keen to offer their analysis, often based on that very same media. It would be interesting how many of these advisers would be interested in knowing what Estate Agents, Solicitors and Surveyors forecast for the industries that they work in!

How the market acts is actually surprisingly simple, but it is perhaps this simplicity that does not lend itself particularly well to headlines. It is crucial therefore to understand that:


The Current Trend in the National Property Market

The amount of land available to build on is restricted and the number of people who want to live in the UK is continuing to increase. One overriding principle to remember, in London, is that property prices have risen, almost continuously, since the end of the Second World War. In some parts of the city they have doubled every ten years over this period.

In the following decade new homes struggled to even breach 200,000 units.

Despite this well known trend the situation is likely to be exacerbated by moves such as the continued introduction of more conservation areas, the protection of green spaces and ever rising immigration.

It can be argued these go far towards improving quality of life. Protecting open spaces gives us places in which to spend our recreational time. Immigration provides us with a richer and more cosmopolitan mix of cultures which broaden our horizons. But ironically they also make the country an even more desirable habitat and increase property demand still further.

The graph below demonstrates the problem by showing the decrease in the number of new homes being built over the last forty years: 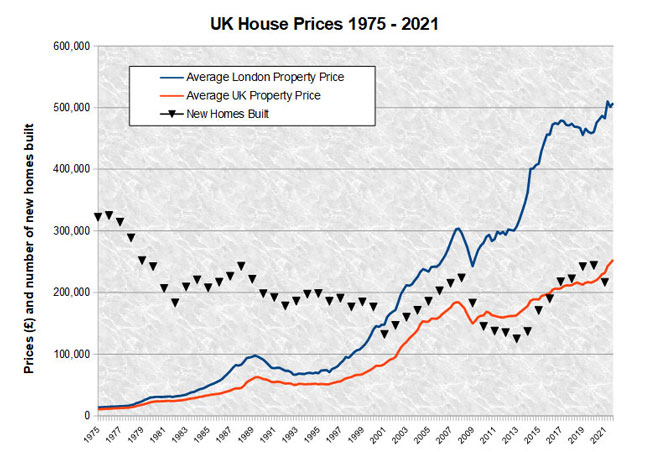 The credit crisis has decreased the number of new dwellings still further as construction companies struggled to raise finances for projects. This drop can clearly be seen in the graph above and was especially acute in the South East of England where the number of additional dwellings dropped by 32% in the financial year 2009-2010.

Furthermore this annual reduction seems to have become permanent since the credit crisis. 2013 saw 118,540 new dwellings completed. At no time since 1975 have more homes been in demand and so few built.

2015 offers a glimmer of hope but at 155,080 new dwellings completed this still remains half the volume required according to the Future Homes Commission.

We also need to factor into this the effects of migration to the United Kingdom. This is has been consistent at around 250,000 since the turn of the millennium (according to the Office of National Statistics).

Some of these will be looking to stay and buy, others are migrant workers which increase demand for rental properties (and so buy-to-let investment demand) while some are foreign investors who see purchasing UK bricks and mortar as a safe haven for their funds.

In summary we have a situation where England and Wales are short of homes and the population is growing faster than they can be built.

There is an alternative measure published by gov.uk which looks at the Net Additional Dwellings. This takes into account not just new build completions but also demolitions, conversions and changes of use (such as from commercial to residential).

To put this in some perspective over the last decade the number of additional dwellings has grown by nearly 2 million while the UK population has swelled by some 5 million and all this happened in a country that was already short of housing in 2004.

The rise of One Person Households

As if what I've discussed so far is not enough the population of the UK is actually adding to the property strain as increasing numbers of people decide to live alone.