The British public have an insatiable appetite for property price predictions. This is hardly surprising since for many their home is also their largest financial investment. For others getting on the ladder is a constant preoccupation.

The media is only too happy to oblige with regular stories based on the calculations of "experts". In Chapter 2: The Media and Property Prices misreporting by the press, and the reasons they do it, is covered. But who are these organizations that they use and how accurate has their track record been?

The Property Experts in Which we Trust

For years I have tracked predictions made by big names and documented how all of them have, more often than not, got it wrong. This year I've put that all into a graph! 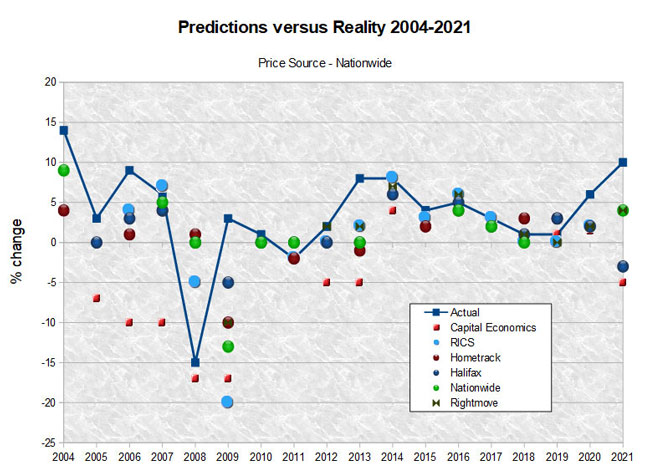 Every year big names in the housing market make property price predictions but as you can see they are rarely on the mark!

For clarity where 'real' price changes are stated these are from the Land Registry and the predictions of each party are their first predictions, not ones that they updated during the given year.

RICS system for predicting the future would have most statisticians turning pale. They simply ask their members "how they feel". If most are optimistic they believe prices will rise and if most are pessimistic they say prices will fall.

Strangely it actually seems to work but only to the extent that they have been quite successful in staying on the right side of zero - they say prices will rise and they do, they will fall and they do.

Despite not being particularly accurate RICS is actually one of the better indicators on the market. But if even they have to reverse predictions to the extent they did in 2009 perhaps they are not to be relied on too heavily.

In recent times their monthly reporting has also suffered from inconsistency. On 10th January 2012 RICS said 'There is no sign of the UK property market picking up in the coming months' which was followed on the 14th February with 'Home sales are expected to rise'.

The Nationwide has been collecting house price data since the early 1970s. As a lender they are able to see the number of applications coming in for approval and this gives an indicator of changes coming in the market. If less people are applying the market is beginning to slow and hence house prices may fall, so long as you assume supply remains constant.

Unfortunately this simple "supply-demand" argument does not always work. If demand slows prices can only drop if supply remains the same or increases. But unlike fruit and vegetables houses are not perishable goods and so, as seen in 2009, supply can dry up as well and match the lack of demand.

Because of this they have had little success in predicting.

The Halifax and the Nationwide are both famous for issuing their monthly year on year price change data. And historically they both have sound data on a national scale but accurate predictions have eluded the Halifax as well.

So much so that in recent years they have started to forecast wide bands ... which isn't really forecasting at all.

This wide range of possible price rises did pay off in 2018 when they predicted increases of "between 0 and 3%". Prices rose 1%.

The Council of Mortgage Lenders

Like the Halifax and the Nationwide the CML has a close grip on the number of new mortgage applications being received across the industry and use this, in part, to predict if the market will be moving up or down in the future.

But as with the Halifax and the Nationwide they can be good at predicting future demand, but cannot know what future supply will be. As such they have not been far off the mark but their track record does not make them particularly accurate when looking for some guidance as to the future.

Recognizing this themselves there have been times, such as 2009 and 2010, when they refused to even offer a prediction. For 2011 the vague approach was used with a forecast of "may fall a bit or stay flat" which may not even technically be a forecast!

For 2014 the CML started to predict volumes of mortgage lending instead of house price moves and for 2015 limited their forecast to "more slowly".

From there on they rarely made widely reported predictions.

Set up to discuss the impending house crash that was about to happen in 2004, and then 2005, and then 2006, etc. The site bought together lots of data from 2004 onward to prove prices must decrease. For many years they had an unstoppable belief that values must fall 50% and that this will generally happen at a rate of 10-15% per year.

Obviously historical data was not in their favour but in 2008 prices did start to fall and at 13% it finally matched the 10-15% prediction which prompted a raft of media reporters to suddenly hail Davis as the man who knew. But his forecast was actually for a 40-50% drop between 2008 and 2011 and in reality the market only moved 4% down over this time period before recovering.

He has since removed this forecast and his name from the website which should perhaps be more accurately renamed wewantahousepricecrash.co.uk

In an interview with Channel 4's 4Homes in 2012 he made a specific point that "Next year, all regions will fall in price ... It's a nonsense to say – as I hear every day – the London market is strong". His 2012 prediction was a decrease of 10% while prices actually rose 2% with London being one of the strongest performing areas.

On Sky News in January 2013 he forecast a 5-10% drop over the coming year but twelve months later property prices were up 4%.

With such a bad track record Davis is a very good example of the media continuing to ask for predictions from sources that have never been right and in Davis' case, never even close to being right. The reason they do this is a mystery.